Major: This is the Darshan Talks Podcast. Today, we're going to be talking about why do you need a clinical trial transparency program? I hit that right or was it a strategy involved in that somehow, Darshan?

Darshan: No, it's really going into why you need it in the first place.

Narrator: This is the Darshan Talks podcast. Regulatory guy, irregular podcast with host Darshan Kulkarni. You can find the show on Twitter @darshantalks or the show's website at darshantalks.com.

Darshan: You've sort of done a couple of podcasts on how do you do it right? And what are some components of it? But a really good question, a really good basic question that we probably need to answer is why even bother having one? And I think the number one reason is because legally from a legal and regulatory perspective which is what matters to a lot of companies, you're required to have a way of actually disclosing a lot of the results associated with this. So you need to have an overall strategy so that you aren't reinventing the wheel each time. So that's number one, just to meet legal regulatory requirements.

Major: Oh, we're making a list on this one okay.

Major: So number one don't reinvent the wheel every time.

Darshan: Exactly, right. Number two, because you need to understand if you're developing other programs whether it's a publication program, whether it's a privacy program, how does all this connect to your transparency program? Because if you're going to say that we're not going to disclose anything well, what does anything mean? Because you may be required to disclose things under your... So if your privacy program says, I won't disclose anything, but your transparency program lands up requiring you to disclose things it's best to get those both out simultaneously so that you have a clear process on how it's going to happen.

Number three, because it's often just the right thing to do, because you've got a situation where you've got patients and participants who are often engaging with you early on during your entire development process, they're helping you understand what is expected. They're helping you be part of your products development strategy. They're helping you recruit new patients, new subjects and when all of that is happening and they're often risking their life participate in your study depending on what type of study it is. It's only right that they be able to get the results, they have an understanding of what studies are happening and that patient-centricity becomes a core goal of your process. So I think that was number three was it?

Darshan: Okay. So another-

Darshan: Yeah. Another reason you might want to have a transparency program is because you are developing an overall strategy and you're going into different countries and you need to be able to understand what that country's expectations are and you're looking to publish in the journals associated with those countries. So if you're doing that, you need to understand what those requirements are. So if you don't have a transparency strategy, you're going to be reinventing and creating a new paragraph for the overall strategy each time. And we've seen clients do this before, where general X will say, "What is your transparency program?" And they'll put out a little blurb and then try out general Y will ask the same question and it'll be a different blurb and that becomes hugely problematic.

Darshan: So the most common one I've heard is we've never had to do it before. The most common one we've heard is we're developing... We're spending all of... So number one would be, we've never had to do this before. Well, yeah, it's a new requirement it's a relatively new requirement. Number two, we're really busy, we're a small growing organization we just don't have the manpower. Which may absolutely be true but doesn't eliminate the fact that you still need to do it. Number three might be we're a small growing organization and we don't have a clear reporting structure that allows us to understand who'd be in charge of it. So it's just too daunting to take this on because we're just not set up for this yet from a organizational structure standpoint.

Number four, we are a developing organization, it's more important that we submit our applications and not as important that we actually disclose the results. These are all again super common push-backs we've gotten. The way they usually compromise is by saying, "What is the absolute minimum I need to do to get things going?" But then when you start discussing it-

Major: I guess I'm just trying to elaborate on that. Like is there a minimum? I mean, I'm sure you have clients or you've had clients who've said, "What's the bare minimum that we need to get through this?" And then what happens?

Number four, you're looking to expand and you want to publish in other countries. Number five, you might be part of an organization that requires you to have a transparency program. That was the, I guess the top five list that we had, and we went over the common objections to originating a transparency program that you've heard we've never had to do this before. We're a small growing busy organization we don't have a clear reporting structure. And the bottom line is there are... It's necessary and there is a bare minimum to it, but it may be more than you're expecting.

Major: Absolutely. So go to the post for this episode on our website at darshantalks.com, join our newsletter to obtain an infographic of this topic. Yes, we will create one for this as well and we'll even have the special stuff about the special section for the common objections that you can use in your presentations to your higher ups to kind of work through this. So any other... anything else Darshan?

Darshan: No, I think this is good. Stay tuned for more podcasts from Major and myself.

Major: All right guys, have a good one.

Narrator: This is the Darshan Talks podcast. Regulatory guy, irregular podcast with host Darshan Kulkarni. You can find the show on Twitter @darshantalks or the show's website at darshantalks.com. 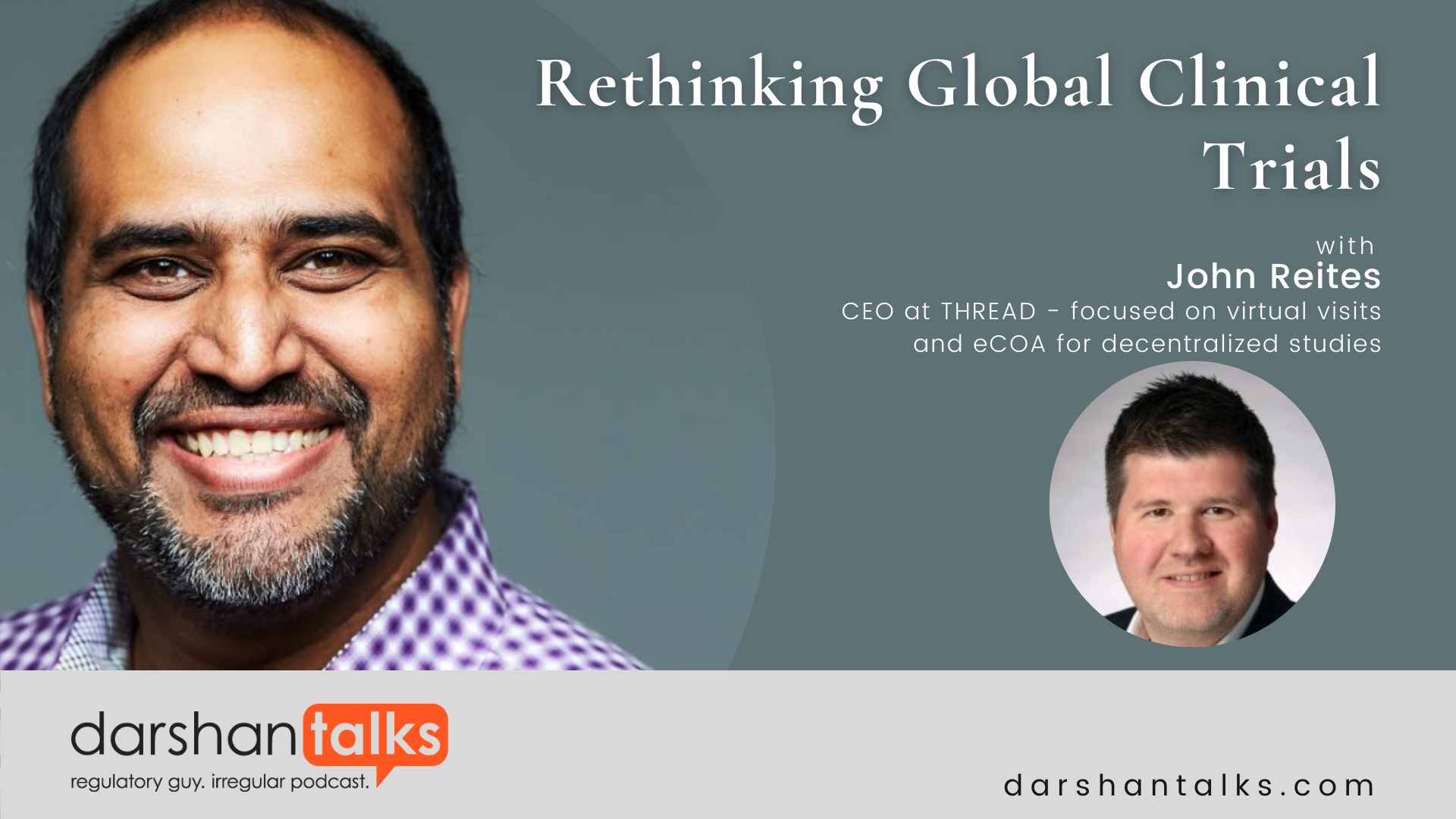 A discussion with CRO CEO John Reites. Our discussion will explore decentralized clinical trials, the missing secret ingredient in clinical...

A discussion on Project Management/Clinical Monitoring/Clinical Operations including on Clinical Development Training, recruitment and...